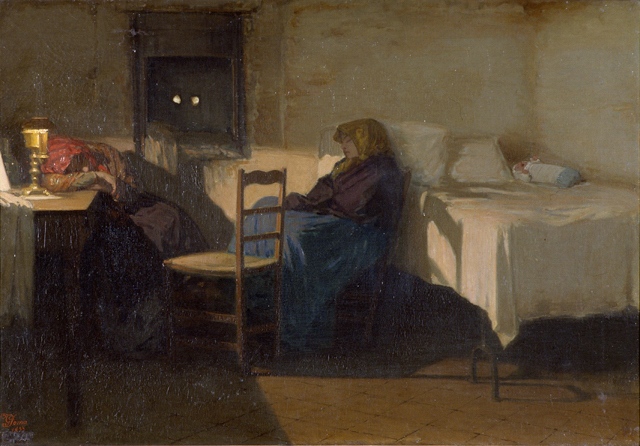 We receive quite often requests from persons who look for ancestors that, at some point, are listed in the papers as born from unknown parents. Provided that it’s not possible to make a general analysis of this kind of situations, it’s quite common in these cases to find children that grew up away from their blood parents. In the article we will consider the event of infant abandonment in the Southern Italy of the last two centuries.

As illustrated in [1] “Nineteenth-century Italy was deeply rooted in tradition, religion, and superstition. Everyone in the area worshiped in the same church, and women shared the services of the same midwife. In such a close-knit community, secrets were few. For the unmarried pregnant woman, this was hostile terrain that presented limited options. She could remain in her family’s home and attempt to conceal a pregnancy. But if shunned by her family, she could take refuge at the home of the local midwife until the time of delivery. Either way,she would most likely give up her baby, as keeping it would forever stigmatize both of them“.  While many abandoned children were illegitimate, poor economic conditions also led to the abandonment of legitimate children by parents who were unable to provide for them. For these parents, often the elimination of one mouth assured the survival of the other children.

In this context the abandonment of infants was a quite recurring circumstance. Of course it was not something new in history. Before Middle Age, poor parents did not abandon children, but they used to sell them [2]: female children were sold to be servants or prostitutes and male ones were not more than arms for the hard works in the agriculture. At a later stage Frederick II banned this usage with a law that prohibited the sale of women for prostitution. Moreover in 1198, Pope Innocent III, to stem the sad discovery of children thrown away in the Tevere river, decreed the establishment of church-sponsored foundling homes. In the simplest case, abandoned babies were often left “exposed” on the steps of a church, so they could easily be found and delivered to the church’s care. But slowly different kinds of “machinery” started to be used to safeguard both the health of the newborn baby and the discretion of the event.

One of the most common system used in churches and foundling homes was the foundling wheel that in Italian was known as “ruota dei proietti” or “ruota degli esposti”. “Proietti” were the abandoned children, literally thrown away (from Latin proicere formed by pro and jacere, that we can translate as “to trow in front of oneself”). This wheel was a horizontal wooden and hollow cylinder with a small door on one side, it was installed to remain half inside the building and half outside on the road. A woman on the inside, alerted by baby crying or the bell ringing, would turn the wheel, bringing the baby inside where it could be cared for a while and the mother could slip away without being seen.

The Bourbon government, following the agreement with the Holy See, which transformed pious institutions for orphans from religious authorities to secular ones, in January 1751 established the Deputation of the Projetti that obliged all municipalities to set up the wheel. The wheel was used to accommodate and ensure the survival of all those children born in precarious situations, for example when father did not recognize the child or did not want to remedy his sin, or families that could not take care of the child because of poverty.

In this period also in Abruzzo and Molise foundling wheels started to be widespread. In smaller towns, the foundling wheel may have been in the wall of the residence of a local midwife. She would have received the child, possibly suckled it immediately to keep it alive, or arranged for a wet-nurse to do so, then taken it to the church to be baptized and to the town hall to be registered. She then consigned a wet-nurse living in or near the town to take the child and provide sustenance, for a monthly stipend paid by the town. If the child was near death when found, many midwives were authorized by the church to baptize the infant, ‘so that its soul would not be lost’. Civil officials were often similarly authorized.

Another decrees was issued by the French governement of Napoleon Bonaparte that, after the annexation of the Kingdom of Naples to the Italic Reign (1806-1815), made obligatory the insitution of the wheel.

About documentation, church records were kept of all baptisms, even those of foundlings. From 1809, when civil birth records were instituted in Italy, not only were foundlings’ baptisms recorded, but each child was duly registered by the Officer of the Civil Registration, in the civil Birth Records.

For normal births, such records gave the date, names and occupations of the parents and the name of the child; and in the usual case there was no other description of the child, besides its gender. Civil birth records for foundlings were different. The declarant (the person presenting the child) was identified by a title, that could be for example “ricevitrice dei proietti” (receiver of castoffs). Rather than simply giving the child’s gender, the civil registration document of a foundling usually stated where it was found, for example “in the public wheel of this town”, or on whatever street or doorstep it was found. If the child had evident birthmarks (or none), that fact was noted as well, along with a description of the clothing or any “tokens” found on the baby. Some records stated that the midwife had arranged to initially feed the child and that it had then been consigned, according to law, to a wet-nurse; sometimes the name of the wet-nurse was also given.

Unless an abandoned child’s parentage was officially established at some later date, most commonly by a rectification (legitimization) that was filed to give the names of one or both parents, or on the after-the-birth marriage record of its parents, the child was always officially referred to by its imposed name and as the child of unknown parents. When such a child married, even though he and everyone in the community knew who his parents were, if no official correction had been made, his marriage record would list his parents as unknown parents.

Since civil records were open to the public, citizens could go to the town hall and ask to see the registers. ‘Unknown’ parents of a foundling could therefore see what name had been given to their child (from the description of tokens or clothing), and sometimes, to whom the baby had been consigned. They might then reclaim the child, although recorded instances of this case are few. If a legally married couple reclaimed a child, they would then go to the civil authorities for registration of a ‘legittimazione’, a correction which would officially name them as parents, and legitimize the child’s birth.

When making family research sometimes the discovery of a “birth” record of a child with unknown parents can be a difficulty hard to overtake. However some clues are still traceable and in some cases the research can continue back in time.

Since their parents were unknown, foundlings had to be given some kind of name, and this was done by the receiver of foundlings, or the priest baptizing the child, or the civil official registering the event. On an ordinary birth or baptism record, usually only the given (‘first’) name of the baby was recorded, since its surname was the same as its father’s. But with foundlings, both the given and the surname had to be assigned. Both, of course, were ‘made-up’, and in the earliest records, first names were recorded, followed by a surname that was chosen or invented according to different kind of approaches. Sometimes the surnames strictly revealed the event of the neglection, as in surnames like “Proietto”, “Esposito” (meaning exposed to the wheel), “Trovato” (found), “Rotile” (of the wheel).

But also other methods were used to choose the surname of a foundling. Sometimes the name of the saint of the day was used. Other times choosen surname referred to the location where the child was found like in “Gradini” (to remind the steps of a church) [1] or “Del Rio” (of the river). Sometimes the surname referred to the fortune or to the will of God, as in “Salvato” (saved), “Diotallevi” (God will take care of you), “Piacquaddio” (God wanted like this), “Fortuna” (luck). Even the “look” of the baby was uses to infer its surname like in “Enorme” (enormous) or “Urbino” (blind). Sometime surnames were very crude, bus even children with less insulting surnames were thusly scorned. “Di Dio” (of god), “D’Angelo” (of an angel), “Del Popolo” (of the people), “Di Giugno” (born in June) and “Gelsomino” (jasmine) are all mild enough surnames, but in certain towns they were used exclusively for foundlings, and marked them just as surely as the cruder versions [3].

The descriptive ‘foundling surname’ eventually became the person’s official name. When a foundling boy grew up, was married and had children, the children’s surnames would be the same as their father’s even though they themselves were not foundlings. Many of these surnames exist to this day, with their bearers having no idea that somewhere in their ancestry there was a foundling child.

Eventually, laws were passed prohibiting the stigmatic names, but in small towns, because the names were made up, they were invariably different than the surnames usually occurring there.

Infant Abandonment and the Foundling Wheel in Southern Italy